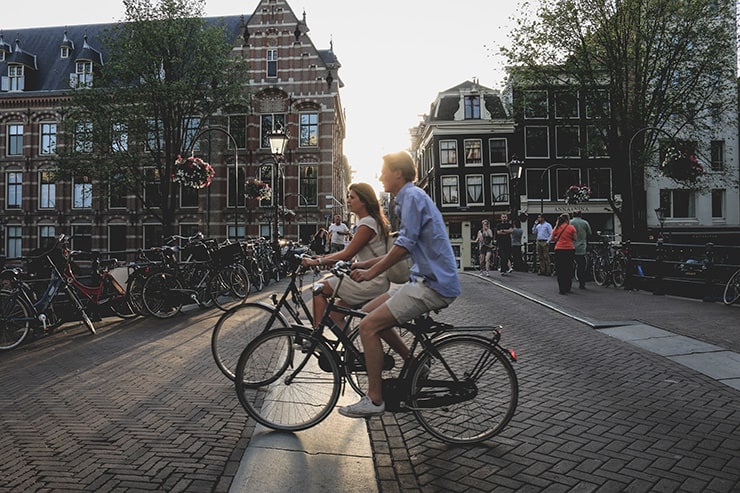 If you have to commute to work every day, why not consider cycling?

Many people love biking to work as it changes up their routine, offers a great workout, and allows them to enjoy the views and fresh air before a long day at the office. For a fun, straightforward ride, plenty of people opt for a single-speed bike.

So are single-speed bikes good for commuting? The short answer is yes.

However, a few factors will determine whether this model is right for you.

Keep reading to discover why a single-speed bike is best for urban commutes and whether it will be compatible with you.

What is A Single-speed Bike?

A single-speed bike (or a “fixie,” as some call it ) only comes with one gear ratio. Unlike multi-speed bikes, this model does not have rear derailleur hangers, shifters, or hub gearing. All of those parts are what is responsible for switching gears.

This model also has a flip flop hub, allowing for a freewheel. (The components of the freewheel are attached to the back wheel.) A fixie also has one chainring and rear sprocket.

Ultimately, the bike’s name is self-explanatory; you can only ride at one speed, aka, in one gear.

Difference Between Single-speed and Fixed-Gear Bikes

While these two models may seem similar at first glance, there is one main factor that sets each apart. Single-speed bikes have a freewheel, while fixed-gear bikes do not.

Having a freewheel means that the wheels will continue to turn even if the peddles are stationary.

This is because the pedal arms, otherwise known as a crank, are independent of the rear cog. You can  stop peddling and coast along the road if you want to take a break.

When it comes to fixed-gear bicycles, the crank and rear cog do not work independently of each other. In simple terms, this means that you can’t coast on a fixed-gear bike.

As long as the wheels are turning, the pedal arms will be turning. Even if you are going downhill, you will need to keep peddling.

Are Single-speed Bikes Good for Commuting?

Compared to other models, such as bmx bikes or other geared bikes, single-speed bikes may be one of the best options for commuting.

Let’s take a look at a few reasons why a fixie may work best for your commute.

Having a lightweight bike is essential for an easy commute, especially if you have to carry the bicycle on a train or bus at some point.

One of the main advantages of single-speed bikes is that they are relatively light.

This results in a lightweight model that is perfect for a daily commute.

Bike Thieves Are Less Likely to Steal a Single-speed Bike

If you have ever owned a mountain bike or a hybrid bike, for example, you have probably worried about it getting stolen at some point.

According to Project 529, over two million bicycles are stolen each year in America.

Fortunately, bike thieves are less likely to steal a single-speed bike. As mentioned above, fixies do not have as many components as other models, giving them less value.

Furthermore, since you can’t change gears on this type of bike, it will be hard to gain speed quickly. This would make it difficult for bike thieves to flee quickly from the scene.

That being said, always remember to lock your bike up. Bicycle thefts still happen!

Single-speed Bikes Are Easy to Handle

Many commuters use single-speed bikes since they are easy to handle. You will find that the steering is responsive and quick, making it easy to maneuver through traffic.

Another advantage of commuting with a fixie is that you won’t have to worry about changing gears.

The last thing you need on the road is a distraction; the bicycle’s simplistic design will help you focus on the vehicles around you. This is what makes bike commuting with a fixie safer than other models.

Lastly, the cogs on the rear wheel will allow for easy coasting. You won’t need to worry about pedaling while going downhill.

Commuting With a Single-speed Bike Is Comfortable

Compared to other bicycles, single-speed bikes are typically more comfortable to ride. Fixies, in particular, come with high-quality frames, saddles, and wheels.

What this means is that even though you won’t have the advantages of a geared bike, your commute will likely be more comfortable.

How To Choose a Single-speed Bike for Commuting

While you may think that all single-speeds are the same, there are a few differences between some brands and models you should watch out for.

In this section, we will review a few important factors to consider when choosing a bicycle for commuting.

From the frame material to the bike saddle, every component can make a big difference in the comfort and efficiency of your ride.

While shopping for a single-speed, you will come across many models that look the same size; however, each may differ greatly in weight.

If you want a lightweight bike, pay attention to the frame material. Furthermore, be careful when considering a vintage bike. Those can be the heaviest.

Let’s take a look at a few main frame materials you will come across. While most commuters will want a lightweight frame, there may be a specific material that suits your needs the best.

This material is typically the cheapest option and is relatively lightweight. It is much less dense than its steel counterpart but may be more uncomfortable to ride due to its stiffness.

Unlike aluminum, steel is heavy and expensive. However, it is more durable and cheaper to repair. Ultimately, steel is the least popular choice for a single-speed due to its weight.

Titanium is typically more expensive than steel and aluminum as it offers high ride quality. It is also lighter than steel and more durable. This may be a good material option if you want to splurge a little.

Probably one of the most expensive frame materials, carbon fiber offers a high strength-to-weight ratio. This means that it is both stronger and lighter than aluminum frames and offers a more comfortable ride. However, this lightweight frame can be susceptible to cracking.

While your typical single-speed will come with a high-quality saddle, it is important to make sure the seat works for you.

Ideally, your sit bones (the bones at the bottom of your pelvis) should be flat on the saddle. If you find that your bike seat is uncomfortable, then you may need assistance from a specialist. Head to your local bike shop for help.

Compared to a hybrid bike, your typical single-speed is not built for holding a lot of cargo, if any. If you need cargo space, invest in a bike with eyelets or some space to attach cargo racks.

If you want some ideas on different kinds of bike racks and what your frame needs, check out this youtube video:

Pros and Cons of Using a Single-speed Bike To Commute

Many cyclists prefer geared bikes to a single gear model for commuting as you can easily shift down for easier pedaling.

However, there are a few advantages of a single-speed bike you may not have thought of. Let’s take a look at the pros and cons of using a single-speed to commute.

As mentioned above, a single-speed bike does not have many components compared to other models. Your typical single-speed will only have one rear cog and chainring.

Unlike mountain bikes, for example, you won’t have to worry about maintaining shifter cables, shifters, or derailleurs. This will not only save you time but save you money as well.

Commuting With a Single-speed Bike Is a Great Workout

Since you only have a single gear to work with, you won’t have the option to switch gears to lower the resistance while peddling.

This means that your lungs, heart, and legs will need to work harder, which will make for a great workout.

Single-speed Bikes Are Fast and Efficient on Flat Roads

Compared to a multi-gear bike, you won’t be able to gain speed as fast on a single-speed. However, there is an exception to this rule when it comes to certain terrain types.

You will be able to achieve high speeds with little effort on flat terrain when riding a fixie.

This is because single-speed bicycles have high energy transfer from the rear wheel to the pedals.

Something to keep in mind is if you want to make the most of your bike and increase your speed, be sure to practice your pedal stroke.

Riding Uphill May Be More Challenging

Since single-speed bikes only have a single gear ratio, going uphill may be more challenging.

Having only one gear means you won’t be able to pedal efficiently, especially when going uphill.

Those with other models, such as road bikes or mountain bikes, can decrease resistance and pedal uphill without using too much effort.

On the other hand, those using a single-speed bike will need to use more leg power. Depending on your bicycle’s gear ratio, you may find it extremely difficult to pedal uphill.

Single-speed Bikes Are Not Ideal for Long Commutes

Something to keep in mind is that single-speeds may not be the best option if you will be traveling a long distance every day.

The main reason for this is that your peddling will not be efficient.

Low efficiency can make a big difference when riding a long distance. You won’t get to your destination nearly as fast as you could with a geared bike.

With that being said, you can still choose a single-speed bike for long commutes. This model may work well if your area doesn’t have a lot of hills and if you want a reliable and low-maintenance bicycle.

Unlike mountain bikes, you won’t have multiple gear ratios to work with to accommodate changes in the terrain. This makes riding on anything other than a flat road pretty difficult.

If you are considering a single-speed bike, make sure your daily ride won’t include steep hills or tough terrains like paths filled with rocks, dirt, or twigs. While it is still possible to ride this type of bicycle in these conditions, it won’t be easy!

Final Thoughts on Commuting with a Single-speed Bike

So, are single-speed bikes good for commuting? They are, but it depends on a few things.

single-speed bikes are the best for urban commutes for a few reasons, including greater efficiency on flat roads, low maintenance, light weight, ease of handling, and high comfort.

On the other hand, fixies will not work for everyone.

If your commute is long, has a lot of hills, and includes rough terrain, it may be best to go with a road bike or a mountain bike.

If you enjoyed this article, be sure to leave a comment and let us know if you will be using a single-speed bike for your commute!